A Flight with Iren Dornier.

We are connected to Iren Dornier's Do-24 ATT since May 1. 2004 when he came to Friedrichshafen the first time. It was part of his Around the World Tour which started on the Philippines. 86 stop-overs in 36 countries with crossings of the North- and South Atlantic and of course part of the Pacific - a really most impressive portfolio in Iren's logbook!
The history of this aircraft is very interesting: Built in 1943 with the serial number 5345, this Do-24 started her career as a SAR plane in Puerto do Pollensa / Mallorca, Spain for 27 years. In 1971 it was returned to the manufacturer. On August 06, 1971 it touched down on the Lake Constance near the Dornier Factory at Immenstaad. I clearly remember that day. The plane was flying low over our house during final approach. This was the first time I saw a real Do-24. Until then I knew her only from books and my father's files. He worked as an aerodynamic engineer for Dornier for most of his life. Also on the Do-24. My father was already retired for a couple of years then. But we immediately went out to Dornier and inspected the mooring plane with a rowing boat. I was electrified. At this time I served with the German Airforce as a Radar Operator and was on a break at home. For the Do-24 visit I had to skip a date with my girl friend Barbara. You can imagine the trouble I became afterwards! But don't worry, I am still married to that girl after nearly 40 years. And yes, I have to admit that I never regretted to change the date in favor of the Do-24 on that day. And it was also important for me to bring my father back to one of his beloved flying boats.

At the same time the 12 year old Iren Dornier (his father was the boss of my father) sat in the cockpit of the Do-24 and decided to bring her back into the air some time. Well, he did it and I am glad we met. Our company Airborne Grafix is next door to each other to one of Iren's Companies, the Dornier Aviation.

This way our circles crossed again and we come to July 07. 2009 when Iren entered our office and invited us for a flight with his Do-24. It was the day the new Dornier Museum Friedrichshafen opened. Iren was busy flying VIPs but had a hard landing the day before due to heavy crosswinds. One of the tires of the main landing gear was a bit worn down after that and Iren decided to make splashdowns on the lake to preserve the tire a bit. I didn't had a camera on hand but Tom did. One hour later we were airborne and heading for the lake in an impressive low level flight.

Whow, first time in the air with a flying boat. What an experience. Skimming the water on flight levels 20 to 200 meters was very thrilling. After an hour we splashed down on the lake with some incredible "bangs" and a lot of splash. It's unbelievable. If you never did this before, you cannot imagine such a landing. I thought, if you're going down with an airliner over waters, this would be your last impression. But it's such a good feeling: your flying with a boat! As long as your over water, you can go down anywhere at any time without harm. It's really so cool. I felt totally safe all the time. Besides that - Iren is a very very experienced pilot.

Well, you know that: if you're asked to name 10 of the most outstanding things happened in your life, this flight definitely is one of those.

The Captain's on board now!

So everything's in the green. As you can see, some young hotheads are arguing about some "...(ancient)  grey-haired html web 1.0" of the former Things with Wings website.
Well, I am the (little, very little) grey-haired creator of this web 1.0 ARTWORK.
Sigh...me too stumbled into web 2.0 meanwhile and I agree with my hot-headed son. Yes.
Let me introduce myself: I am the CAPTAIN. Period. Adjust your backrest in the upright position.
We are ready for takeoff. And please remember: this is my very first post in a blog.
About 10 years ago, this term didn't even exist. No reason to worry. Just lean back and relax.
We're on full throttle now...AAAAAAND......liftoff - we're AIRBORNE!
To start, I like to turn back the clock into the year 2005. We've met quite some spots on earth in the past.
That's why I decided to start the series with "Letters from..."
And here comes "Letters from Kagoshima - part 1". Kagoshima is located in southern Japan on Kyushu island. It was the home base for NAC Nippon Airship Corporation's Zeppelin NT airship.
November 2005 was the first time I was engaged in the work on that airship in Japan. On the first day off NAC led us to the town of Chiran. Famous in the region for the Peace Museum for Kamikaze Pilots and the Samurai Residents and Gardens. Very very impressive! More about that later.
For now I just add some photos taken at the museum. Remember: it's NOT allowed to take photos at the memorial. I knew that and I did not take notice of this until a friendly lady told me not to take photos inside the museum. I want to express to the Japanese people that I am sorry for that. I did not take photos of last letters and other heartbreaking exhibits - just of the planes. I was fully aware of the special spirit of that place!
I am Josef Hueber - this is your captain speakin' :-) 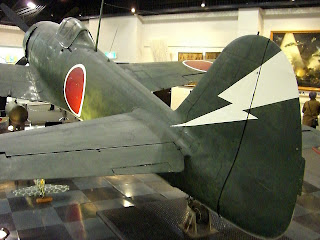 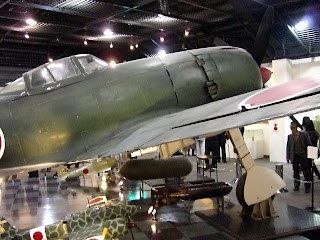 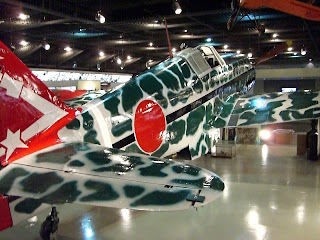 The later production of the Hien was troubled by the bombing raids of the B-29s.
The type on exhibition is a Kawasaki Ki-61-ll-KAI "Hien" equipped with a Ha-140 engine based on the Daimler-Benz DB-605. Probably this plane was reverted back to the Ki-61-l "TEI"-wing with stretched fuselage and enlarged rudder - due to it's former role as a high flying interceptor against the ever increasing B-29 "B-san". Even some ramming units were established. By the way: The Japanese Army didn't call them "Kamikaze".
Stay tuned to our next post, which will be a more peaceful one...
Sayonara!
Josef HUEBER
www.airbornegrafix.com
Eingestellt von Airborne Grafix um 14:57 Keine Kommentare:

Yay, finally done, we are online. For all of you who can remember things-with-wings.com as an grey-haired html web 1.0 site, here's the good news: we are a blog now! :)
In the last three days while we uploaded all the stuff from the old site to this shiny new place almost 300 people visited our blog! Quite a good start I think :-)

The greatest thing in this new (well, at least for me it's new) technology is, that we can now react quickly to your requests and submissions. So if you have any cool pictures, informations or any other nice stuff about aviation just write us or post it. And for all of you people out there who are searching for hard-to-find-informations for projects, seminars, school or just for fun, just let us know, maybe we can help ya out!

Have fun with our historic aircrafts, rare prototypes, caspian monsters and everything else that managed it to take-off!

And don't forget to check out our three-view art section! We will publish some high-class prints of them this month!